Shrilk is a fully biodegradable bioplastic made from chitosan (found in shrimp shells) and fibroin, a silk protein that mimics the microarchitecture of insect exoskeletons. Shrilk can be used to make objects without causing environmental damage like traditional synthetic plastics, and it biodegrades quickly in compost, releasing nitrogen-rich nutrient fertiliser. Shrilk may be useful for creating implantable foams, films, and scaffolds for surgical closures, wound healing, tissue engineering, and regenerative medicine applications because chitosan and fibroin are both used in FDA-approved devices.

Market Analysis: Shrilk demand has increased due to increased demand from the packaging industry, while application in the medical field for wound healing has created an upswing in the shrilk market. Plastics derived from shrilk are widely used in the automotive industry to produce automotive components with superior resistance to high temperatures, good abrasion resistance, high strength, and chemical resistance, among other properties. For More Details: https://materialsscience.peersalleyconferences.com/tracks/shrilk 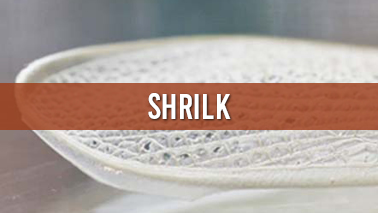